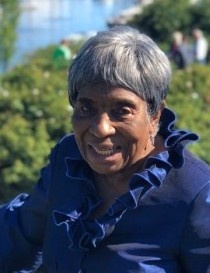 Viola "Vie" Linkhorn, 91 of Springfield passed away peacefully on January 29, 2020 at Center for Hope Hospice in Elizabeth.

Family and friends are invited to attend a visitation for Vie at the Galante Funeral Home, 2800 Morris Ave. Union on Tuesday February 4 from 9:30 - 11:30 AM. A Funeral Service will be celebrated in the funeral home at 11:30 AM. Interment will follow at Hollywood Cemetery in Union.

Born in Whatley, Alabama to a family of six siblings, Vie moved to New York City when she was 20 years old. Starting out working as a nanny, Vie held many different positions in the city throughout the years. A ten year employee of TWA, she retired as a TSA agent at John F. Kennedy International Airport in New York in 1992. Vie moved to Pennsylvania in 2004 before residing in Springfield since 2015.

Vie loved her family deeply, and enjoyed spending time with them. Whether it was getting together for a nice meal and a glass of fine wine, or a day spent shopping, Vie cherished these times. She was always looking forward to the next family gathering. Vie also loved to dance, and listen to music; she also treasured time spent in the sunshine.

The daughter of the late Milton Harris and Harriette Armstead Harris, Vie was the loving mother of Jimmie Harris-Loften and his wife Roberta. She was the dear grandmother of Mrs. Yolanda Janette Loften-Sims, Dr. Yancisca Harriette Loften and Ms. Yasmine Nicole Loften. She was the loving great-grandmother of Akil Loften-Jackson, Khristyn N. Loften, Erick Loften-Harris, Aaron Loften-Jackson, Yaara Loften-Cooke, Amir Loften-Jackson and Illyana R. Loften-Velez. She was predeceased by her brothers Shelly Harris, James Harris and Herbert Harris and by sisters Lucille Ruffin and Vergie Harper. She is also survived by her great-nieces and great-nephews Belinda Harris-Ramnarace, Demarish Smith and Simona Harris, and Salaam Harris and Desmond Ruffin, and by a host of other beloved relatives and friends.

In lieu of flowers, donations in her memory may be made to Center for Hope Hospice in Elizabeth.

To order memorial trees or send flowers to the family in memory of Viola Linkhorn, please visit our flower store.