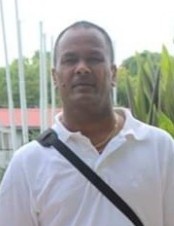 On Saturday May 16th 2020, Tulsie Rupnarain was called away to heaven at the age of 59.

Roy was born on June 7th,1960 in Georgetown, Guyana to the late Mr. Roopnarine and Ms. Gulsan.  He worked as a laborer at a power plant for many years before moving to America in 2004. He then settled in Irvington New Jersey from 2004 until his passing. Roy has worked for GEO Reentry services for the past 10 years as a unit counselor in Newark, New Jersey.

He is survived by his loving wife Irene to whom he has been married to for the past 31 years. He was the proud father of Subrina, his only daughter. He leaves behind his loving son-in-law Avinash and his grandson Ashton.

He will be missed by his extended family members, friends, and coworkers. He will be remembered for his kind nature and generosity. He was an individual who was known for his love of life, great sense of humor, love for music, and for always being the life of the party.

Funeral  Services for Tulsie Rupnarain will be private at the Galante Funeral home in Union NJ.

To order memorial trees or send flowers to the family in memory of Tulsie Rupnarain, please visit our flower store.