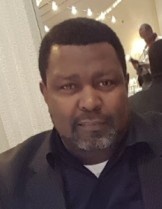 A celebration of life service will be held at 11:00 a.m., Thursday, December 17th at Galante Funeral Home 2800 Morris Avenue Union, N.J.   He will be laid to rest at Rosehill Cemetery in Linden, N.J.

Tony was born on November 29th, 1966 to, Joseph Alcide and Monica Alcide in Castries, St. Lucia,

both of whom predeceased him.

He is survived by his loving wife of 30 years, Sonya Alcide.

Left to cherish his loving memory are his wife, Sonya Alcide,

He will also be lovingly remembered by his church family at The Church of The Living God in Harlem, NY, his neighbors, co-workers and many friends and extended family members.

Tony left St. Lucia and made his way to New York City in the late 1980’s.  There he met his wife and soulmate, Sonya in Brooklyn, New York.  Tony pursued Sonya and the two of them shared a mighty love until his passing.

He excelled in every aspect of his life.  He was a devoted husband, father, grandfather, faithful and compassionate brother, and he rose to the title of Supervisor at the Riverbay Corporation in Bronx, N.Y.

Tony’s family meant more to him than anything else in the world, something he often mentioned. He was unendingly proud of his children and pushed himself to support them through renal illness which he overcame following a kidney transplant.  His happiness stemmed from seeing them dreaming, achieving and succeeding in their chosen professions.

Neighbors, friends, family and church members knew him for his unwavering religious conviction, unyielding work ethic, great compassion and tireless service to others.

Tony was a Sabbath observer who admonished and encouraged his family and those who he engaged in religious conversation to follow the commandment of God, so they too could ride the high places of the earth.  He truly became brother Tony eleven years ago when he received the precious gift of the Holy Ghost, and encouraged many and prayed with others to receive the Holy Ghost.

Most recently, Tony drove from home to work every Monday – Friday with his youngest daughter, Tonnette, following her return home from Wisconsin after completing her doctoral studies in Psychology. He regularly engaged Tonnette in discussions about serving God, praying for her husband, and always putting God first in her life. Tony also spent time talking to his second youngest daughter Alison about her life, sharing how proud he was of her accomplishments, all the while encouraging her to serve the Lord. Tony introduced his oldest daughter Voncille, whom he nicknamed “Big Red,” to her husband Phaenehas. He was proud to walk her down the aisle on her wedding day, and now they're in their 16th year of marriage. When Tony entered his home after a day of work, he would yell out, “wife, I’m home. He would then call his only son, T.J., downstairs to lecture him about serving the Lord and the importance of education for a black man in America.

Tony’s niece Lechelle Alcide aka “Cookie,” whom he cared for as his daughter, learned most of her biggest life lessons from him. The love they shared was special and God given. He will forever be missed and cherished. He wanted his entire family to serve the Lord, knowing that only then could each one achieve their personal best.

Being a grandfather enriched Tony in a way that easily translated to his grandchildren.  His grandkids always greeted him first when they entered his home exclaiming, “Grandpa is here yay!

Tony’s was an avid Jets fan who spent his weekends watching football and politics. He also enjoyed reading the bible, listening to gospel music, cooking for the family on the grill and spending time with his wife, children and grandchildren.

His passing following a battle with Covid-19 leaves an ache and sadness that only God can heal.  We know that Tony would say, “I am not dead, I am just sleeping”, because of his hope in the resurrection of the dead in Christ.

To order memorial trees or send flowers to the family in memory of Tony Alcide, please visit our flower store.