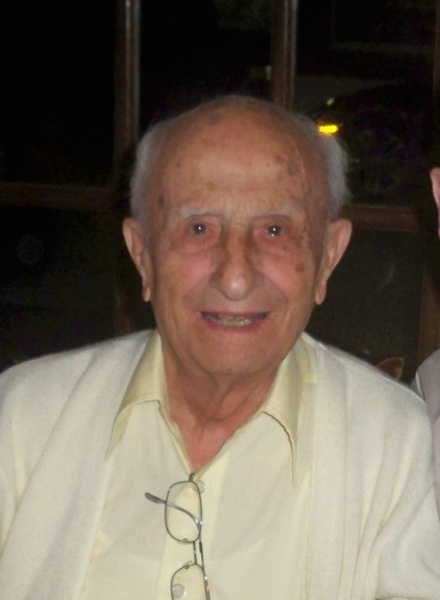 Toby Santoro, small in stature but with a heart of a giant, who was loved by all and graced the world with his presence for 106 years, passed away on January 30, 2020 after a full and amazing life.

Relatives and friends are invited to attend a visitation for Toby at the Galante Funeral Home, 54 Roseland Ave. Caldwell on Monday from 4-8 PM. A Funeral Mass will be celebrated at Notre Dame Church in North Caldwell on Tuesday at 10 AM. Interment will follow at Holy Cross Cemetery.

Toby was born October 9, 1913 near Foggia, Italy, and at 7 years old, came to the U.S. with his family.  He grew up in Newark, NJ, and at age 13, his father got him a summer job in a barbershop to “keep him busy and out of trouble”.  He never went back to school but received a wonderful education from working in several barbershops and becoming street smart.  In 1938, he enrolled in Newark’s Wilfred Beauty School, after which he became a consultant/stylist at Franklin Simon & Co. in East Orange.  He was the creator of “the career girl coiffure” and his model eventually became the editor of Cosmopolitan.   Toby continued on with his career to become an award-winning hair stylist and developed a following of celebrities including Gloria Swanson, Martha Raye and Jayne Mansfield.

During this time, Toby married Ella Roselle, who also modeled his hairstyles for various shows.  Toby and Ella had a wonderful life and loved ballroom dancing.  In fact, they became regulars at Cedar Grove’s Meadowbrook Ballroom and Roseland in New York City.  In 1942, Toby and Ella welcomed their only child, Toby Ann.

After many years at Franklin Simon, he opened his own shop, Toby Coiffeurs on Harrison Avenue in East Orange, which he had almost 20 years until redevelopment took over the neighborhood.  He continued in the profession, working in various salons for many years.  Before finally retiring at 98, he worked part time at Franco’s Barber Shop in Caldwell, which has been in business since 1957.

Toby excelled in everything he did.  He was an amazing bowler, earning the nickname of “Toby the Terror” and “Rolling Thunder” after he rolled a clean 627 series at age 91.    While he was an avid golfer in the past, he had not played in recent years.  However, for the last six years, he has been an active participant in the Senior Olympics held in Woodbridge, NJ, and has earned countless gold medals for bocce.  Since there was no one else in his age bracket, Toby’s opponent for the annual tournaments was Mayor John McCormac, who became a very dear friend, despite losing.

Toby was also an amazing cook, especially his Italian sausages with peppers and onions.  They were the absolute best and always requested when taking anything to a potluck dinner.  Toby’s dear wife, Ella, passed away in 1998, and since then, he has done most of the cooking for himself and his grandson, John, until about a year ago when his health began failing.

Toby’s grandson, John Alworth, is the son of his daughter Toby Ann, who sadly passed away in 1991 from Multiple Sclerosis.  John was a young man at that time and continued living with his grandparents in their Glen Ridge home.  After Ella died, Toby and John moved to Caldwell, where they have taken care of each other all these years.

In addition to John, Toby is survived by his niece Lucille Havala (Mick), nephew Glenn Roselle (Andrea), niece Josephine Becker, and nephew Louis Ciccone (Joan), along with many, many friends he has made during his long life.  He was predeceased by his brothers, Victor and Anthony.

To order memorial trees or send flowers to the family in memory of Toby Santoro, please visit our flower store.