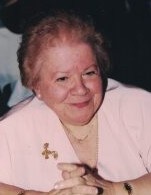 Wife of the late Frank.

Theodora was the mother of Peter Russo and the late Norma Jean Russo.

Theodora was born and raised in the Vailsburg section of Newark and later moved to Union in 1978.

She was a teacher with the Archdiocese of Newark at Sacred Heart School in Vailsburg and then later taught at Kearny High School.

In her youth she received many awards and diplomas from various art institutes.

She was former member of the Union republican club and a member of choir at St. Michaels Church in Union.

Later she became an administrator and reviewer of local Arts and Concerts in the area, with the Union Leader Newspaper for 10 years before her retirement.

Memorial services  are scheduled for a later date.

To order memorial trees or send flowers to the family in memory of Theodora Russo, please visit our flower store.