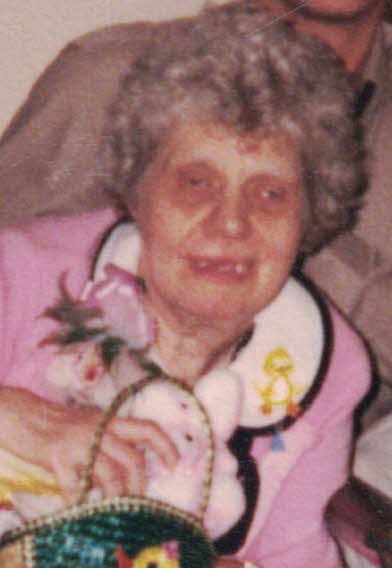 Born in Jersey City, New Jersey to Luigina Desiderio  Astone and Gaetano Astone on May 16th, 1929, she had cerebral palsy.

Sabbatina, also known as ‘Tina,’ lived in Vineland, N.J. for 52 years, and at the Morias Group Home in Millville, N.J.  for the last 30 years, where she attended the Active Day program.

She is remembered there with fondness by staff and housemates alike, who considered her to be their “Grandmom.”

Sabbatina was a friendly, funny, loving, strong, and welcoming woman; she loved hugs and holding hands.

She was considerate and sensitive of her caretakers.

When things got complex and difficult, they quoted her as saying, “Honey, you sure you can manage?”

In 2013, when her group home came under new ownership, Tina became a representative for the quality of living in the home,

to her state appointed guardian.

Because of her comments and observations, their household became more quickly and smoothly stabilized during the transition.

She was also known to have loved to eat, spaghetti-and-meatballs being one of her favorite dishes.

She enjoyed playing the game Connect Four, and Slots in Atlantic City.

Sabbatina was feisty; and carefully protective of her pocket book collection and her other belongings.

She loved her baby dolls, her colorful crayons, and the coloring books that were given to her.

And she enjoyed being with her “people,” her family.

She is predeceased  by her twin brother, Victorio Astone; and two of her brothers Louis ‘Gino’ Astone and Italo Astone;

as well as her sisters-in-law Louise Christinziani Astone and Romaine Waite Astone, and her brother-in-law Peter Signorello.

and her grand nephew Derek Price.

She is survived by her brother Lisandro ‘Alex’ Astone, her sisters Sylvia Signorello and Josephine Cicero,

and her second cousins John Iachelli (Carol) and C.J.Iachelli (Jennifer).

She had  30 grand  nieces and nephews. In lieu of flowers, donations may be sent to one of the RETT Syndrome organizations,

To order memorial trees or send flowers to the family in memory of Sabbatina Astone, please visit our flower store.