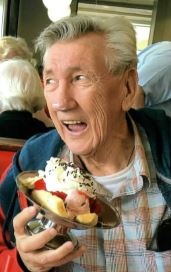 Relatives and friends are kindly invited to gather for visitation on Wednesday, January 1, 2020 from 4:00 to 8:00 p.m. at the Galante Funeral Home, 54 Roseland Avenue, Caldwell, NJ. The funeral will be held from the funeral home on Thursday, January 2, 2020 at 9:30 a.m. followed by the Funeral Mass at 10:30 a.m. in St. Aloysius Church, 219 Bloomfield Avenue, Caldwell. Burial will follow in Saint Michael’s Cemetery, 120 Saddle River Road, South Hackensack, N.J.

Patrick was born in the Bronx, N.Y. on March 8, 1937 to Alice (nee Kelly) and William Dalton. He was raised in the Bronx. He married Marion Jeanette (nee Kempsey) and they moved to Wallington, N.J. to raise their family. After Marion predeceased him, he married Colette (nee Terascavage). Pat retired and they settled in Moscow, PA for over 25 years.

Patrick worked as a security guard for over 30 years for Rockefeller Center in New York City. When he moved to Moscow, PA he worshipped and volunteered at St.  Catherine’s of Siena Church.

Pat was a selfless man who spent most of his adult life caring for others in need, spending countless years bringing joy to others. He fed the homeless in New York City by making 50 sandwiches every Saturday night. Pat volunteered in the soup kitchen in St. Francis Church in Scranton, PA and assisted the residents at Saint Mary’s Villa, in Elmhurst Township, PA. Making someone smile and have a happy day was one of Pat’s favorite past times.  When he could no longer drive that did not stop him from doing good deeds. He would hand out dum-dum lollipops or sing a song to his fellow residents. His greatest joy was bringing a smile to someone’s face.

In lieu of flowers please donate your time and/or treasure and “pay it forward” and #belikepat.

To order memorial trees or send flowers to the family in memory of Patrick Dalton, please visit our flower store.