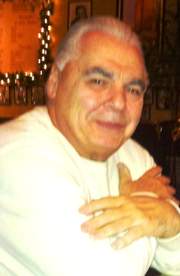 Nicholas Collucci 69 of Lyndhurst, N.J. formerly of the Ironbound Section of Newark, NJ

The funeral will be from the Galante Funeral home 2800 Morris Ave. Union, N.J.

On Wednesday at 9 am.

Entombment will follow in Holy Cross Cemetery in North Arlington.

Visitation will be on Tuesday from 4 - 8 pm.

Born in Newark, he lived in the Ironbound Section for many years,

at the time of his death he had been living in Lyndhurst 6 years.

He was a Heavy Equipment Dispatcher for J.F. Lomma Inc in South Kearny for 20 years.

He was a member of the Ironbound Executives Association,

Nicky was married to his late wife Margaret (nee Battipaglia) for 43 years,

until she passed away in 2012. This year would have made 50 years of marriage.

He is the father of Kimberly and Lisa Collucci and Nicole Albano and her husband Rocco.

He was the loving grandfather of Jack, Nicholas, Sophia, and Rocco.

He was the son of the late Nicholas and the late Nancy (nee Benedetto) Collucci,

and the brother of Angela Collucci, and the late Roxanne Esposito.

He is also survived by many Uncles, Aunts, Nieces, Nephews, Cousins and Friends.

To order memorial trees or send flowers to the family in memory of Nicholas Collucci, please visit our flower store.