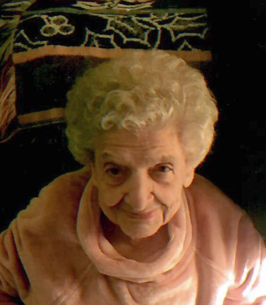 Visitation will be held on Wednesday, March 18th from 3:00 to 7:00 p.m. at the Ron Mowad Funeral Home & Cremation Service (located in the Galante Funeral Home) 2800 Morris Avenue, Union, N.J. A celebration of Nancy’s life and Prayer Service will be held in the funeral home on Thursday morning, March 19th at 10:00 a.m. Burial will follow in Saint Gertrude’s Cemetery, 53 Inman Avenue, Colonia, N.J.

Nancy was born and raised in Elizabeth, N.J. on March 19th, 1928 to the late Thomas and Josephine (nee Cambria) Italiano. She also raised her own family in Elizabeth, prior to moving to Union for 15 years and subsequently to Cranford 2 years ago.

Prior to retiring in 1993, she was the senior clerk of the lock box department at the National State Bank in Elizabeth for many years. Nancy also worked at Bartone’s Bakery in Elizabeth for more than a decade. Her first major employment was at SE&M Vernon Company in Elizabeth, where she met and subsequently married Jim Masterson, Sr. in 1954.

A “friend to all she met,” Nancy was outgoing and always someone who enjoyed laughing and spending time with a wide circle of friends and family. She was active in her church and community, as a past president of the 50 Plus Club of Saint Mary of the Assumption Parish; and Past President of the Ehrhart Garden Tenant’s Association in Union, where she lived for many years. One of her favorite volunteer activities was to dress up and entertain children as the Easter Bunny for the Oncology Benefit Institute of Union Hospital’s Annual Easter Bunny breakfast, which raised funds to help cancer patients in need.

In her leisure time, she would enjoy a good game of bingo, travel to Atlantic City to play the slot machines

and was an avid bowler.
Nancy was the beloved wife of 38 years to her late husband, Jim, who predeceased her in 1992. She was also predeceased by her three brothers Anthony, Joseph, and Philip Italiano.

She was also a devoted great-grandmother -- or “GiGI” to Maximus Martins, Julian Masterson and Audrey Brede.

As child of the Great Depression (and after losing her own mother and brother at the same time when she was just 17), Nancy’s motto in life was, “One doesn’t appreciate something until it has been taken away from you.” Her family and friends share that sentiment during this time, as she has been taken from us two days short of her 92nd birthday. We will always remember her jokes (in which she always messed up the punchline), her colorful stories of life and growing up, and her refreshing sense of humor.
May she enter into eternal rest, reunited now with so many who have gone before her.

To order memorial trees or send flowers to the family in memory of Nancy Masterson, please visit our flower store.