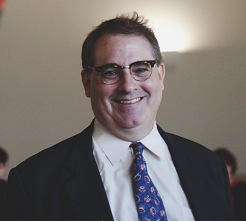 
Merrill Jeppson Clark, family man, immigration attorney, and volleyball MVP passed away due to complications from leukemia on January 5, 2020. Merrill was born on October 25, 1959, in Salt Lake City, Utah to Harlan and Mary Alice Clark. He was the oldest of six children who were all raised in the energy of New York City. He proudly graduated from Summit High School class of 1978 - Go Hilltoppers! Merrill served a two-year mission for The Church of Jesus Christ of Latter-day Saints in Barcelona, Spain where he taught others about Christ and learned his favorite language, Spanish.

With his preppy style and New York dry humor, he charmed a Seattle seamstress and violist Cynthia Larsen, marrying her in 1982 in the Salt Lake City temple. Their first child Mackenzie Merrill was born in 1984. Three years later, he completed his education and graduated from Brigham Young University Law School - Go Cougars! Shortly after, the family trekked east to Brooklyn, New York where Elizabeth Zorah and Abigail Alice were born in 1988 and 1990, respectively. He moved his family to Summit, New Jersey and bought a house down the road from his childhood home.

He constantly asked “how can I help” and served all those around him in any way he could, especially through church service with The Church of Jesus Christ of Latter-day Saints. Merrill’s unapologetically blunt and witty humor made him a character in every setting. He found his true professional passion when he became an immigration attorney legalizing DREAMers and fighting against Trump’s policies. Merrill really hit his stride as a grandfather in encouraging his grandchildren to be fearless. He is survived by his mother Mary Alice, his wife Cynthia and daughters Mackenzie (Harding), Elizabeth (MacDonald), and Abigail...and everyone listening and reading this.

In lieu of flowers please consider a donation to THEDREAM.US an educational scholarship fund for DREAMers/DACA immigrant kids (Deferred Action for Childhood Arrivals). In Merrill’s last day of consciousness, doctors had to take away his work computer and files while he was happily and diligently writing briefs for his immigration clients. More information can be found at www.thedream.us - we thank you for supporting his professional endeavors.

To order memorial trees or send flowers to the family in memory of Merrill Clark, please visit our flower store.

The Church of Jesus Christ of Latter Day Saints

The Church of Jesus Christ of Latter Day Saints