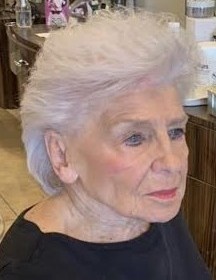 Marie L. Juliano-Villani,100, entered into eternal rest July 13th. Born in Newark to Anthony, foreman to Thomas Edison, & Rose Sicnolfi, homemaker. Marie created a long, virtuous, fulfilled and accomplished life. In happier times, she married C Robert Juliano, executive with RCA Records, and with him, raised her young family in that special house on Gregory Avenue in West Orange NJ. When Mr. Juliano suddenly passed away, widowed with two young sons, Marie reinvented herself. Always a fashion plate, she began designing jewelry and clothing to her many friends as well as creating an interior design business. Going on to establish House of Juliano in South Orange, she was known for her fashion shows and being the first to showcase pink mink. This avocation developed into a thriving career. As a widow, she became very involved in charitable organizations, which led to her chairing the Italian Migration to America Committee along with Congressman Peter Rodino. At that time, she had met with President Lyndon B. Johnson and Vice President Hubert Humphrey. This led her to meet The Honorable Ralph A Villani, Mayor of Newark NJ, her second husband. He was the first Italian American mayor in a major city in the US. Together, they enjoyed traveling, entertaining, and the beautiful summer home they shared on Inlet Terrace in Belmar, NJ. Soon after her marriage, Mr. Villani sadly passed away. Marie once again reinvented herself into the world of politics. Proudly, she was Council Woman at Large in New Jersey's largest city, Newark, and the first female to serve on the council. She served proudly for 20 years often being the deciding vote of 9 councilmen, and always putting the people of Newark and the future of the city as her priority above and beyond anything else. In her later years, Marie enjoyed spending time with her loved ones, reading, playing Solitaire, dining out, especially at her corner table at Calandra's in Caldwell, and enjoying herself in her beautifully decorated Home & Garden Claridge House apartment where she remained until her passing. She is predeceased by her son, Allen, both of her husbands, her sisters, Lucy and Jo, and her brother John. Surviving are her son Robbi, his wife Michele of Tewksbury, NJ, grandchildren Robert of Annandale NJ, Jamian of Brooklyn NY, Gabrielle Villani of Bradenton FL, Julianna and her husband Michael Roche of Wilton CT, great grandchildren Fiona and Michael Roche, many loving nieces & nephews and her devoted caretaker Minister Teressa Bell.

The family will be celebrating her life, the viewing on Tuesday July 20th at 3-7pm, Galante Funeral Home, 54 Roseland Ave. Caldwell NJ and her services held on Wednesday July 21st 10:30am at St Josephs Church in West Orange, with burial immediately following at Gate of Heaven Cemetery.

To order memorial trees or send flowers to the family in memory of Marie Villani, please visit our flower store.