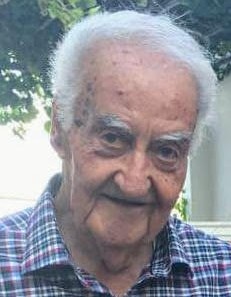 On Friday, April 16, 2021, Elias Nikolaou Zavolas, loving husband, father and grandfather passed away peacefully at the age of 87.

Elias was born on October 29, 1933 in Piraeus, Greece to Nikolaos and Kalliope Zavolas.

He lost both parents when he was a teenager. Following their passing, his loving sister Metaxia supported him.

At 18 years old, Elias volunteered in the Greek Air Force as a communications officer, and proudly served as a member of the color guard. During his service, he competed and consistently finished on the podium for the Shotput in the Greek National Military Games.

After his military service, he proudly worked as the secretary to his village of Volada, Karpathos for over 10 years.

On July 10, 1955, after falling in love at first sight; he married his one true love, Eleni (Lela) Stavrakis. Together, they raised three sons, Nikos, Minas, and Renos.

In 1963, he immigrated to the United States to work in the hotel and restaurant industry. Despite being overseas, he continued to support Volada and served as General Secretary of St Anargyri Association for many years.

He retired in 1995, and returned to his homeland in Volada, Karpathos. There he and Lela would continue to be inseparable everywhere they went and they enjoyed many years together celebrating life.

Elias and Lela, along with Ernia; his mother in law who he loved like his own mother; were active in all the Karpathian events and they never missed a church service. He loved tending to his garden, where he suddenly found himself supporting a dozen cats regularly. Elias was a staple at the local kafenia, where he would often ignite conversation with a hot take on the news of the day; and never stayed silent on any debate.

Every summer, Elias and Lela would look forward to spending time with their three grandchildren. They took them to the beach, out for dinner, and even to enjoy the bouzoukia.

Elias will be remembered as a humble and dedicated man.. he was quite simply a gentleman. He always thought of others, was punctual, and put everyone’s needs ahead of his own; especially his wife’s.

He returned to the United States in 2019 after the passing of the love of his life. He spent his final years surrounded by his loved ones, including his daughter in law, Evangelia who he loved like a daughter.

Elias was preceded in death by his wife, Lela Zavolas, mother in law Ernia Stavrakis, his sisters, Evangelia, Metaxia, and Georgia. He is survived by his three sons; Nikos and his wife Evangelia, Minas, and Renos; his grandchildren Elias and his wife Erica, Georgios and his wife Fani, Constantine; and his grand dog Troy; his sister Mary Diakonis; and many cousins, nieces, and nephews.

Relatives and friends are invited to visit with the family at St. Demetrios Greek Orthodox Church, 721 Rahway Ave. Union on Tuesday from 10 - 11 AM. A Funeral service will be celebrated at 11 AM, and burial will follow at Graceland Memorial Park.

To order memorial trees or send flowers to the family in memory of Louis Zavolas, please visit our flower store.