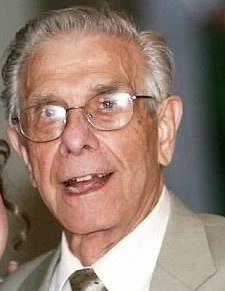 Louis DePinto, 93 of Pequannock passed away peacefully on July 13, 2021, surrounded by his loving family.

Relatives and friends are invited to attend a visitation for Lou at the Galante Funeral Home, 54 Roseland Ave. Caldwell on Friday July 16 from 3-7 PM. A Funeral Mass will be celebrated at Holy Spirit Church in Pequannock on Saturday at 12 noon, followed by the bestowment of military honors at 1 PM. Cremation will be held privately.

Born in Brooklyn, NY, Lou was one of ten brothers in their hard-working family where the older siblings helped care for the youngest. He learned from an early age the significance of a strong work ethic and the utmost importance of "family first". Lou carried these values with him through his entire life. To help support the family, Lou left school to become a tool & die maker, then proudly served in the United States Army, earning the rank of Corporal during the Korean Conflict.

In 1958, Lou and his beautiful wife visited Pequannock and fell in love with the town. They decided to set down roots and raise their family there. They purchased a new home that throughout the next sixty years would be the place of countless holidays, special occasions and frequent visits by countless friends, extended family members and by generations of their own family.

Lou worked as a tool & die maker throughout his career, most recently for Eaton, Corp. in Parsippany until his retirement in 1993. Lou was a dedicated member of the Knights of Columbus and Pequannock UNICO, organizations that exemplify his service above self mentality. He and his wife enjoyed traveling at every opportunity. Lou also liked to go crabbing and fishing. Though quiet and reserved most times, Lou had a terrific sense of humor, and the ability to not curse in front of anyone, often substituting words like "cripe", "your sister's tomato can", or "your father's whitewash".

Lou's most beautiful legacy is his large, close-knit family, to whom he successfully instilled the paramount importance of family, honest work and humility. He was much loved and will be greatly missed.

To order memorial trees or send flowers to the family in memory of Louis DePinto, please visit our flower store.