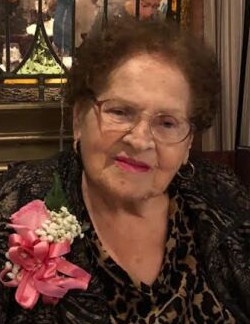 Lina Galazzo, 91, of West Orange, passed away at home on June 16, 2022.  Born in Solarino, Sicily to parents Amalia (Gozzo) Musso and Giuseppe Musso, Lina arrived in the United States in 1950 and lived in Orange before moving to West Orange.  She worked as a Housekeeping Supervisor at St. Marys Hospital in Orange for more than 20 years.

Lina was predeceased by her sisters, Irene and Marianna, and brothers, Santo, Paul and Albert.

Family and friends are invited to attend a visitation for Lina on Monday June 20, from 4-8 PM

Funeral from at The Galante Funeral Home 2800 Morris Ave. in Union on Tuesday at 8:30 AM

A Funeral Mass will be celebrated at St. Michael Church in Union at 10:15 AM, followed by Interment at Gate Of Heaven Cemetery in East Hanover.

To order memorial trees or send flowers to the family in memory of Lina Galazzo, please visit our flower store.