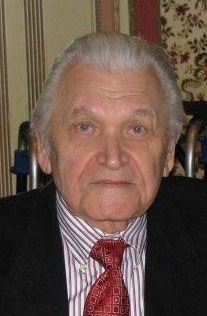 He was the loving husband of Dolores (nee Iacobucci).

Brother of the late Michael Nahirny.

Joseph is also survived by many loving nieces and nephews.

Joseph was born and raised in Newark before moving to Springfield 60 years ago.

After graduating High School, Joseph started working for Lehman Manufacturing Company and later became District Manager there for many years before his retirement in 1993.

Throughout WWII, he worked for General Motors as an Inspector. During production of machine guns there he noticed a defect in the assembly of them. He then stopped the assembly line to prevent any further guns to be assembled in error. This prompted a group of Generals to bring him up on charges to decide his fate, because this interfered with war  production. He was brought in front of this group to explain why he stopped the assembly line during this critical time. Upon examination of the guns, a mistake was discovered in the guns, which was later corrected. Because of his sharp eye, he later received a Medal and a Citation of Recognition from those same Generals for discovering the defect. In 1966, Joseph was honored at the Springfield Knights of Columbus, as a 4th Degree Sir Knight; he was also the Treasurer there for many years.

He was also a member of the Nocturnal  Society at St. James Church in Springfield.

Family and friends are invited to attend services for Joseph at St. James Church, 45 S. Springfield Ave. Springfield on Monday. A visitation will be held at the church from 9:30 - 10:30 AM, with a funeral mass celebrated at 10:30 AM. Interment will follow at Gate of Heaven Cemetery. Arrangements are in the care of the Galante Funeral Home in Union.

To order memorial trees or send flowers to the family in memory of Joseph Nahirny, please visit our flower store.