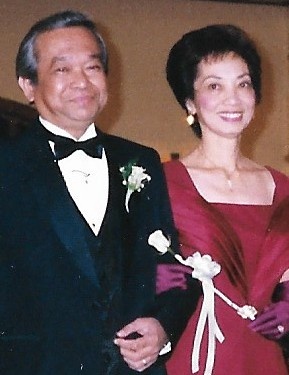 Jose L. Castellano of Roselle, New Jersey passed away on July 27, 2018 in Elizabeth, New Jersey after complications from a brief illness.

Son of Rustico and Amparo Leyeza Castellano of Lipa, Philippines, Jose was born on February 11, 1939. He graduated from the elite Ateneo de Manila Senior High School in 1957. He earned a Bachelor of Science Degree in Textile Engineering from the Mapua Institute of Technology in 1964. Jose married his high school sweetheart, Priscilla Reyes Katigbak, on April 18, 1965.

After the Immigration and Naturalization (Hart-Celler) Act of 1965 opened the doors of skilled workers from all countries, he immigrated to the United States soon after. He spent his professional career as a commercial dyer at textile mills primarily in northern New Jersey, working over 20 years for the Bentex BTF Mills Corporation.

Lifelong pursuer of the American Dream, devotee of Notre Dame football, and faithful servant of our Lord, he achieved a lifelong goal of providing an American education for all his children, all of whom earned advanced degrees from American universities.

He is survived by his wife of 53 years Priscilla and 5 children: Patrick, Maryrose, Gerard, Kenneth, and Joachim, and 11 grandchildren.

In lieu of flowers, contributions may be made to St. Joseph the Carpenter - Capital Campaign Donation.  Please visit https://stjosephsroselle.weshareonline.org for more information.

Funeral from the Galante Funeral Home 2800 Morris Ave. Union NJ on Wednesday at 8:30AM.

Funeral Mass at St. Joseph the Carpenter Church Roselle NJ at 10AM

Visitation on Tuesday from 3 to 7 PM

To order memorial trees or send flowers to the family in memory of Jose Castellano, please visit our flower store.