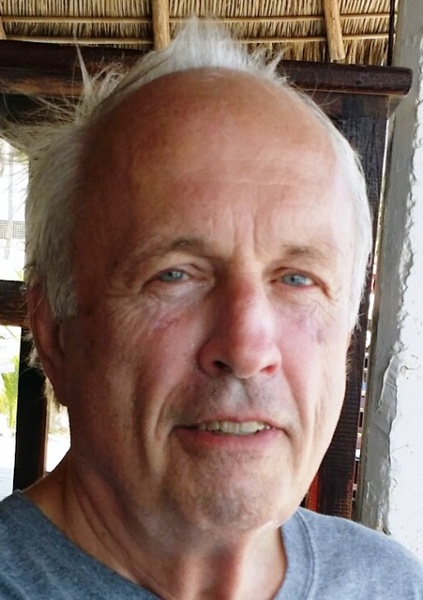 Died suddenly November 6, 2019 in Melaque, Mexico after a brief illness.

on the eve of FDR’s landslide 4th electoral victory.

and his nieces and nephews Tom, Nancy, Robert, Michael, and Marie.

A lifelong educator, he was a professor of Spanish at Montclair State University

He received his BA from the University of Toledo,

followed by an MA and PhD in Spanish, focusing on Spanish Medieval Literature, at the University of Arizona in Tucson.

He was a lifelong outdoorsman, animal lover, enthusiast of Spanish cultures,

history buff, and diligent follower of politics and current events.

He enjoyed spending time in nature with his sons.

He was a keen investor in real estate as well as stocks, and enjoyed tracking both the financial and real estate markets.

He had an encyclopedic knowledge of American automobiles

and loved the classic muscle cars, especially the Corvette,

and in particular the iconic 1963 split window,

and they proceeded to flip over in a Toledo corn field a week later.

He was very handy, and naturally mechanically inclined, teaching and imparting these skills onto his sons.

He grew up in the country as he liked to call it, in a rural part of Toledo

where he would hunt with his father and discover arrowheads and other Native American artifacts in the creek bed.

His family was among the earliest settlers of Ohio,

coming from Connecticut to what was then called the Western Reserve and a part of Connecticut.

and during World War II, Albert vulcanized and retreaded tires for

that produced the Jeeps that rolled across Nazi occupied Europe,

and he worked there alongside his father during his youth.

His mother Marcella was a homemaker and bookkeeper for the store,

and a Mayflower descendant.

while they were both graduate students at the University of Arizona,

where he spent his nearly 50 year career teaching at Montclair State University.

He was quite proud of his sons Louis and Thomas,

who attended the University of Pennsylvania and New York University, respectively,

and of the success in their careers, and of their families.

He loved spending time with his three grandchildren as well.

Recently, he had retired from teaching and remarried,

and he and his wife Irma Erazo were enjoying life together and traveling and vacationing throughout Mexico and Florida,

finally doing so many of the things he had been longing to do in retirement, until his passing.

Donations in his memory can be made to the Ara Parseghian Medical Research Fund.

To order memorial trees or send flowers to the family in memory of John Zahner, please visit our flower store.

Our Lady of Fatima Church