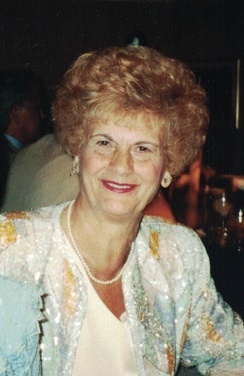 My dad, Anthony, was born in the Ironbound section of Newark NJ

and met my Mom while visiting his parents hometown of Petralia.

After a short courtship, and with my Maternal grandfather's blessings,

They proceeded to take a month long honeymoon across Italy

where Jackie, as she came to be known, experienced the world outside Petralia for the first time. After a very rough Ship voyage they Arrived in the US settling on New York Ave. In the Ironbound section of Newark.

She absolutely loved her new homeland and on April 8th 1963 she became a naturalized United States citizen. She helped my father with several of the businesses he was involved with

including selling shoes ( out of the basement of our home on Elm St.) selling jewelry, cosmetics, and statues.

On several occasions they bought, renovated and sold real estate as well.

Later in life she would say it was her Willowbrook Mall.

She loved going to New York City and loved having Chinese Food in China town.

Jackie was beautiful and always made a striking figure dressing to the nines all the time.

She enjoyed entertaining family and friends especially for the Holidays where she would shine as a cook.

Some of her specialities where Seafood Salad, breaded Cardun and Stuffed Artichoke. Every year she made it a point to celebrate St. Joseph in honor of her father Giuseppe Bellina.

Making Pasta con Sardi among other traditional dishes. She loved going out to dinner with my Dad, Tony Del,

some of her favorites over the years where Don's 21, Casa Dante and The Belmont Tavern

usually starting her meal with a Gin and Tonic. Because my dad felt like he took his "Gioia Mia" away from her family

he made it a point to send her back to Petralia as often as possible.

So 7 times we spent the summer together in Sicily. Just me my Mom and her family. After her mother died we stopped going

and my Mom and Dad helped my maternal Grandfather and her 2 siblings locate to the States.

Her life was always about Family. In 1976 she moved to Glen Ridge New Jersey. It was in Glen Ridge where I started my first garden.

That Jackie destroyed when she realized what it was. She would often be seen walking up or down Washington Street to shop in Bloomfield Center. In 1984 she met one of her all time best friends and future family member my wife Pamela. She was thrilled when she became a grandmother to our two boys.

She would become a typical grandmother who loved to spoil Anthony and Daniel.

Daniel once convinced her to buy him a giant Iguana Lizard

that she Carried several blocks from Bloomfiled Center in a large glass terrarium.

Daniel marching in front like the leader of his own private parade.

No sooner did they appear in front of the house before Pam had them both marching back...evidently 2 dogs, a fish, a hamster, a hermet crab and a frog where enough. Then there was the time Nonni and Zia Maria, my moms sister, baby sat.

but in typical Noni and Zia Maria fashion they were laughing hysterically. Her love of Petralia and Sicily was contagious.

She loved to listen to traditional Sicilan music while working around the house. My dad died when mom was only 59 and she loved saying how my son Anthony comforted her by saying...don't worry Noni, a name he christened her, I will be your midget husband. Noni stuck, in fact all our children's friends called her that, especially when they wanted a Bowl of pasta ..she always obliged. After my dad passed away she would travel to Sicily more often spending extended periods there.

Evertime she returned from a visit she would shower our kids with gifts.

Over the years,with the help of friends, she renovated her parents home there.

A part of her doing it to honor her parents memory I'm sure. Pam and I were able to return to Sicily with her several times before the affects of the stroke she suffered 7 years ago made it to difficult for her to travel. We will always cherish those memories. Thanks to our immediate family and her caretakers we were able to keep her as comfortable and loved as possible in the comfort of her own home, that she loved so much. Thru all the pain and suffering she still smiled when she saw us

and even, till recently, laughed when I called her Sciacquatu (chubby). We will miss everything about you but we find comfort in knowing that you will finally be at Peace with all who loved you especially Daddy, your parents and your sister. Ciao Gioia Ti Volimu Bene She was predeceased by her mother and father Giuseppe and Tomasina Bellina. her in-Laws Calogero and Frances Diliberti Her Husband Anthony Diliberti and her Sister Maria Bellina. She leaves behind to grieve her, her only son Charlie and his wife Pamela their children Anthony and Daniel. Daniel's fiance Rachel Ettinger. Pamela's Parents Judy and Neil Maresca Her Brother Frank Bellina and his wife Nardina her nieces Anna Maria Bellina Scillia her husband Robert and their two children Michael and Gianna Her niece Josephine Bellina Lavista and her Husband Anthony and their three children Nicole, Michael and Matthew. And of course all the loving caregivers that helped us on her final journey Eni, Thelma, Bummi and Chy Chy And it is in dying that we are born to Eternal Life. Amen. Funeral arrangements are as follows

The Funeral Service will be held at 1 PM in the Funeral Home Entombment will follow in Hollywood Memorial Park 1500 Stuyvesant Avenue Union, N.J. 07083

To order memorial trees or send flowers to the family in memory of Jacqueline Diliberti, please visit our flower store.