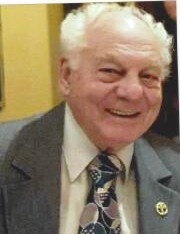 Frank was born and raised in Newark and moved to West Caldwell in 1955.

He was a graduate of the Boys Vocational High School in Newark and had proudly served in the US Army during WWII.

In Franks early life, he worked as a Longshoremen.

For most of Franks life he worked as a machinist for Resistoflex in Roseland, and H & H Thermostat in Cedar Grove, and also at C&N Tooling in Cedar Grove (which he really enjoyed working at!). As a machinist with these companies he was then promoted to a management position before his retirement.

Franks biggest pleasure was taking care of his home and also his parents homes in Florida. He enjoyed taking many road trips to Florida.

He was a member of the Padre Pio Society at St. Aloysius Church in Caldwell where he attended masses frequently.

Dear grandfather of Natalie Marie and her boyfriend Robert Nichols, John David and his wife Alyssa, and the late Gerard Anthony.

Devoted son of the late Frances and John Rossi of Newark and Florida: Predeceased by his sisters Nancy Rossi (1930) , Orsola "Lena" Marchese and Gloria Heiss, and his sister in law Marie Andolino.

Known as a truly unique and energetic person, Frank will be missed by all who had the pleasure of knowing him!

The funeral will be from the Galante Funeral Home, 54 Roseland Ave Caldwell NJ on Saturday at 10:30AM.

The Funeral Mass will be celebrated at St. Raphael Church in Livingston at 11AM.

Entombment  to follow at Gate of Heaven Chapel Mausoleum in East Hanover NJ.

Friends and family are invited to attend a visitation on Saturday from 9 - 10:30 AM.

To order memorial trees or send flowers to the family in memory of Frank Rossi, please visit our flower store.