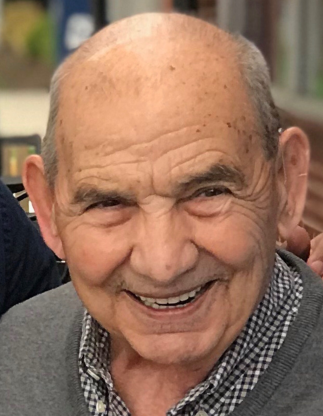 Emilio Guerino
Emilio Guerino, 85, passed away on August 15, 2020. He is survived by his beloved wife of 55 years, Amalia Guerino (née Gigliotti), his children, Frank Guerino & his wife Teresa, his daughter Maria Forte & her husband, Carmine. He is the beloved grandfather of Michael, Marc, Carmine & Francesco & step-grandfather to Mariah & Hayley.
Emilio was born on May 29, 1935 in Castagna, Catanzaro, Italy to his parents Angelamaria (née Arcuri) & Francesco. He was predeceased by his sisters, Mariafelice Talarico & Rita Sacco. He is also survived by his two brothers. Giuseppe & his wife Ester, his brother Mario & his wife Linda, as well as many beautiful nieces and nephews.
At the age of 19, Emilio embarked on a long voyage on a Ship named “Roma” arriving in the United States of America on April 19, 1956. He lived in Elizabeth until 2008, then lived in Springfield, NJ.
Emilio started as a furniture maker in Italy and later, when he came to United States and worked as a carpenter, he eventually had the honor of joining the Carpenters Millwright Union Local 715 until he retired in 2000.
Emilio enjoyed gardening, watching soccer, cooking & most of all spending time with his family, especially his grandchildren. He appreciated the simple things in life. One of the things he was most proud of was that he came to the United States from true poverty and he was afforded the opportunity to work hard and achieve the American dream for himself as well as his family. He will forever live in the hearts of all that loved him.
Due to the current pandemic, private services for Emilio will be held for immediate family.

To order memorial trees or send flowers to the family in memory of Emilio Guerino, please visit our flower store.