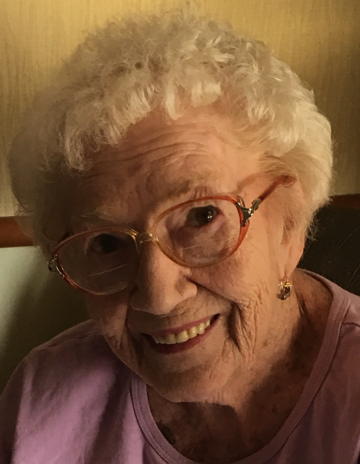 Elizabeth B. "Rusty" Ayers, 94 of Pompton Plains passed away peacefully at home on August 7, 2020.
Relatives and friends are invited to attend a visitation for Rusty at the Galante Funeral Home, 54 Roseland Ave. Caldwell on Tuesday from 5-8 PM. A Funeral Service will be celebrated at the The First Reformed Church, 529 Newark Pompton Tpke. Pompton Plains on Wednesday at 10 AM. Burial will follow at the First Reformed Church Cemetery. Guests are reminded to kindly wear a mask at all times and to maintain social distancing when possible. Church capacity is limited to 100 people. Livestreaming is available for those unable to attend by visiting www.firstreformedchurch.com, and click on livestream.

Born in Glasgow, Scotland on February 18, 1926, Elizabeth immigrated to the United States with her parents William and Mary (nee Greer) Brown when she was just six months old. She and her family settled in Bloomfield where she was raised. Elizabeth excelled in school, and graduated from high school at 16 years of age. After graduation, she worked to put herself through nursing school, and successfully earned the degree of Registered Nurse. After marrying her beloved husband John Loring Ayers, they selected beautiful Pompton Plains to raise their young family. Rusty called Pompton Plains home for the next 63 years. Elizabeth proudly became a naturalized US Citizen in 1965. Forever a strong, intelligent and compassionate woman, Rusty decided she wanted more for herself and her family; she went back to school and graduated from New Jersey City University with a bachelor's degree in 1968. After working as a nurse in several hospitals, Rusty found her true calling as a school nurse and health educator. She lovingly served the students of Stephen J. Gerace Elementary School in Pequannock for many years until her retirement.

Rusty held her family near to her heart, and treasured time spent with the ones she loved. Always quick with a joke, she enjoyed having a good time. Whether it was swimming in the pool, savoring a delicious hamburger at a family cookout, or traveling the world, Rusty certainly enjoyed herself, and the good company she kept. A 'rabid' fan of the New York Giants, Sundays in the Ayers' home was all about football. Sharp and quick-witted her entire life, Rusty enjoyed watching Jeopardy, and was an avid reader, frequently finishing a book per day. A woman with many talents, she played the electronic keyboard, crocheted, and was an avid bowler in her Friday night league. In earlier years, Rusty's adventurous spirit was nourished by following bands like the Four Seasons on their tours with her friends.

The family would like to extend their heartfelt thanks to the professionals at Ascend Hospice. Their care and love made the final days of Rusty's life as peaceful as could be.

Flowers are graciously accepted, or, if preferred a donation in her memory may be made to St. Jude Children's Research Hospital , or to the World War II Memorial.

To order memorial trees or send flowers to the family in memory of Elizabeth "Rusty" Ayers, please visit our flower store.