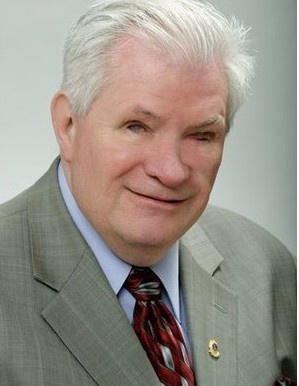 Whenever he was asked about his life as a blind man, Ed Lucas would reply simply, “I consider it an inconvenience, not a handicap.’’

It was his indomitable spirit that enabled him to realize his dreams and become an inspiration to thousands of people.

A sports journalism pioneer, Lucas, a Jersey Journal columnist who also wrote for numerous publications, including Yankee Magazine, died Wednesday at St. Barnabas Hospital in Livingston. He was 82.

Born in Jersey City, Lucas, a Union resident, considered himself lucky he had full vision during his early childhood.

“For one thing, how do you describe color to someone who’s never seen?” he would ask. “It becomes a concept. The sky is blue. The grass is green.’’

Lucas was 12 years old in the fall of 1951 when Bobby Thomson hit the “Shot Heard ‘Round the World’’ in the bottom of the ninth inning to propel his beloved New York Giants to the National League pennant over the Brooklyn Dodgers.

After the game, he and his friends went outside to play some ball. Lucas, a lefty pitcher, was struck between the eyes with a line drive. Four years later he was blind.

His parents enrolled him at St. Joseph’s School for the Blind in Jersey City, where he was taught to be self-sufficient. A grateful Lucas later worked for many years at the school, helping it to raise funds.

One winter, his parents took him to a clothing store in Newark, where he met Yankee shortstop Phil Rizzuto, who was working there. In those days, most ballplayers didn’t make a lot of money and supplemented their income with jobs during the winter.

The two started a close friendship that lasted more than half a century until the Hall of Famer’s death in 2007.

It was while attending Seton Hall University in South Orange that Lucas began pursuing his dream of becoming a baseball writer.

“People would ask how could a blind man cover a baseball game?” he recalled. “It was unheard of. I always say never, never, never give up.’’

It was that perseverance that enabled him to achieve his goal. Friends who accompanied him to major league games as his guide and “eyes’' were amazed at how Lucas could tell where a ball was hit simply by listening to the crack of the bat.

They were also amazed that whenever he walked onto the field before a game with tape recorder in hand, almost immediately players from both teams would come over to say hello.

Vincent Thomas, a longtime friend, was one of those who accompanied Lucas to MLB ballparks.

“When you look at the players who he reported on, and many who became friends, we look at them as heroes ... but Eddie Lucas was the hero,” Thomas said Wednesday. “He was a genuine hero, for all the accomplishments he was able to attain against overwhelming odds.”

Lucas would tell people about when Bobby Bonds was with the Yankees, he would sometimes bring his toddler son, Barry, into the clubhouse. Lucas recalled bouncing young Barry on his knees. Years later, when Barry Bonds was a superstar and considered one of the toughest in baseball to interview, he always found time to speak with Lucas.

He was also the first non-member of the Yankees organization to be married at home plate at Yankee Stadium, tying the knot with his second wife, Allison, on March 10, 2006. The arrangements were handled by Yankees owner George Steinbrenner.

“Ed Lucas was more than a fine writer,” said Jersey Journal Managing Editor Ron Zeitlinger. “He was one of the strongest men I knew, always moving forward, as if these great obstacles we were amazed he overcame on a daily basis were never there in the first place.”

He wrote an autobiography, “Seeing Home’' and his baseball column ran during the season in The Jersey Journal. He was also a motivational speaker, appearing at many functions, and a member of the Hudson County Sports, New Jersey Sportswriters and Irish Baseball halls of fame, among other honors.

Moreover, he devoted most of his later years to raising money for charities.

After Lucas left St. Joseph’s he started the Ed Lucas Foundation, which provides funds for seeing eye dogs, help for disabled veterans, college scholarships for the blind and disabled, and money for diabetes research. Lucas was a diabetic.

The tournament is still active as former Yankee and Met pitching great David Cone succeeded Michael as the standard bearer.

Lucas was also known for his keen wit and always had a number of jokes to tell friends. He would often preface the jokes with “are there any nuns around?’’ as many of them could be off-color.

He had one regret.

“If I could see again for just 10 minutes, I’d want to see my wife Allison and my two sons (Chris and Ed),’’ he said.

Ed was also a longtime member and past president of the Lions Club where he was a recipient of the Melvin Jones award.

Ed is the son of the late Edward and Rosanna (nee Furey) Lucas; beloved husband of  Allison (nee Pfeifle); loving father of Ed and his wife Sharon and Chris; brother of the late Maureen and Jimmy Hanks; and the dear grandfather of EJ, Adam and Sean Lucas.

Relatives and friends are invited to attend a visitation for Ed at the Galante Funeral Home, 2800 Morris Ave. Union on Sunday November 14 from 1-5 PM. A Funeral Mass will be celebrated at St. James Church in Springfield on Monday November 15 at 10:30 AM. Friends attending the funeral mass are asked to meet directly at church. Interment will follow at Hollywood Memorial Park.

Donations can be made to Seeing Eye, Inc or Seton Hall University

To order memorial trees or send flowers to the family in memory of Edward Lucas, please visit our flower store.