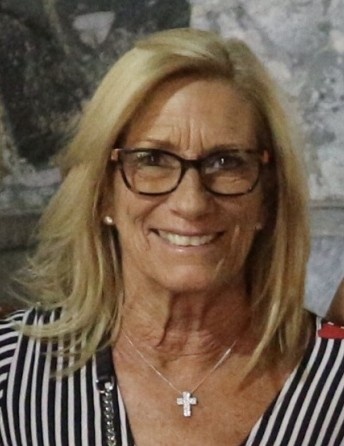 Cynthia Louise Serpe, 65 of North Caldwell and Sea Girt, New Jersey passed at sunrise on May 10, 2019 after a valiant battle with breast cancer. Cyndy was born on October 22, 1953 to Vern and Ted Richards in Newark, NJ. After graduating from James Caldwell High School, she went on to manage The Cage Restaurant at Tiger Racquet Club. It was here in 1977 that she met her loving husband of 40 years, Ralph Serpe. Ralph and Cyndy wed in 1979 at St. Aloysius Church and went on to have three children; Derek Serpe and his wife Charlotte, Samantha Bazemore and her husband Kent, and Sloane Serpe. They also became proud grandparents to Hendrix Serpe and Jett Bazemore. Cyndy devoted her life to ensuring those around her felt happy and loved. She attended all of her childrens’ hockey, field hockey, and lacrosse games and was always the loudest fan. She found immense joy spending time and playing with her grandsons. She was an avid and talented tennis and paddle player at Essex Fells Country Club and Spring Lake Bath and Tennis Club. Those who knew her well would say Cyndy’s happiest moments were long sunny days spent on the beach in Sea Girt laughing with her family and friends. Cyndy was predeceased by her parents, Vern and Ted. She is survived by her husband, children, grandchildren, sister Susan Bechtler and brother Neal Richards. A Memorial Mass will be held at Notre Dame Church in North Caldwell on Wednesday, May 15, 2019 at 11 a.m. Family and friends are also invited to attend a reception celebrating Cyndy's life at the Essex Fells Country Club immediately following mass. Arrangements are in the care of the Galante Funeral Home, 54 Roseland Ave. Caldwell.

To order memorial trees or send flowers to the family in memory of Cyndy Serpe, please visit our flower store.