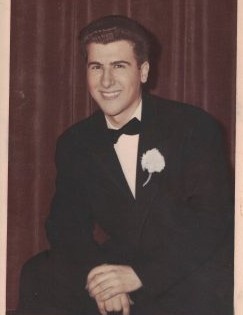 Constantino Donnarumma - Born in Newark, N.J. and spending the remainder of his life in Union, NJ., passed away in Saint Barnabas  Medical Center on April 24, 2020. The angels opened the doors of heaven and he was met by the Lord, after a hard  long journey.

He was the loving son of the late Carmine and Josephine (nee Paticchio) Donnarumma, the devoted brother of Gemma Donnarumma. Rae Astone, Angie Salge and the late Rochelle Guido. He was Uncle Sonny to nieces, nephews and families.

He graduated from West Side High School in Newark, N.J. He served his country as a proud veteran of the United States Army in the 1950's during the Korean War.

He was known for his intelligence, good looks, and his appreciation of good Italian food. He had a skill for joke telling, doing impersonations of Bogart and Cagney and belting out Frank Sinatra tunes. Famously known in town as a regular at all Board of Education meetings and biggest supporter and fan of Union High School baseball and football games.

He was loved and will be deeply missed by his family and friends and remembered for his passion for life and bravery during his illness.

A Memorial Service will be held at a future date.

In Lieu of Flowers the family prefers that you make Memorials to:

To order memorial trees or send flowers to the family in memory of Constantino Donnarumma, please visit our flower store.