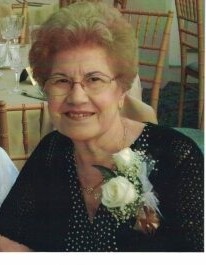 The funeral is from Galante Funeral Home, 2800 Morris Ave on Monday, October 12th at 9 AM. The Funeral  Mass is at St. Michael's Church, Union at 10:15. Interment will follow in Hollywood Memorial Park, Union. Visitation is on  Sunday 2-6 PM.

Connie was born in Newark, NJ to the late Philip and Sophia Tondo. Raised in East Orange she lived over 45 years in Union before moving to Chatham, NJ.

She worked for the A&P Tea Company in Newark and the Union Center National Bank in Union.  Connie was a Eucharistic minister at St. Michael's Church for many years.

Connie was the beloved wife of the late Donald Matrale Jr. for 50 years until his death in 2007.

The sister of Phyllis (Tondo) Carlucci and the late Paul and Victor Tondo. She is survived by her children, Donald III, Philip and his wife Dorothy, Paul and Tina Marie. Grandchildren, Lauren, Julie, Carissa, Luke, Mark and Kyle.

Connie's family would like to give special thanks to all the staff at Garden Terrace Nursing Home, Chatham  for their kindness and care.

To order memorial trees or send flowers to the family in memory of Concetta Matrale, please visit our flower store.