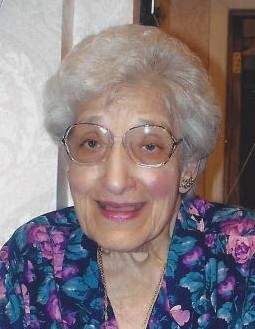 Clara Vanyo (nee Casale), 92 passed away peacefully on January 6, 2019 at The Chelsea Assisted Living in Montville.

Funeral is from the Galante Funeral Home, 54 Roseland Ave. Caldwell on Thursday at 8:30 AM. A Funeral Mass will be celebrated at St. Thomas More Church in Fairfield at 10 AM. Interment will follow at Gate of Heaven Cemetery. Visitation is on Wednesday from 3-8 PM at the funeral home.

Born in Newark on March 2, 1926, Clara was raised in the Ironbound Section, and graduated from East Side High School in 1944. During her school years she was very active in sports, and also studied dance. Following high school, she graduated as a nurses aide from Columbus Hospital in Newark in 1945, later working at Prudential Life Insurance Company in Newark.

On September 16, 1951 Clara married Charles Vanyo, and they moved to Caldwell Township, now Fairfield, in 1956.

Clara and her late husband Charles were very proud to be one of the founding families of St. Thomas More Parish, Fairfield in 1963. Clara was one of the original members of the church choir and rosary society, and was also a volunteer worker at the St. Thomas More Elementary School, and at Church bingo.

In addition to her husband Charles, Clara was predeceased by her sister Mildred and by her brothers Frank, Ernest and Robert. She is survived by her son Charles Vanyo, daughter-in-law Lorraine Vanyo, and by several nieces and nephews.

Clara would most like to be remembered as a woman who made a loving home for her husband and son; and a woman who never sought riches, but only good health and happiness; and who, when all was said and done, lived a good, honest and joyful life.

To order memorial trees or send flowers to the family in memory of Clara Vanyo, please visit our flower store.