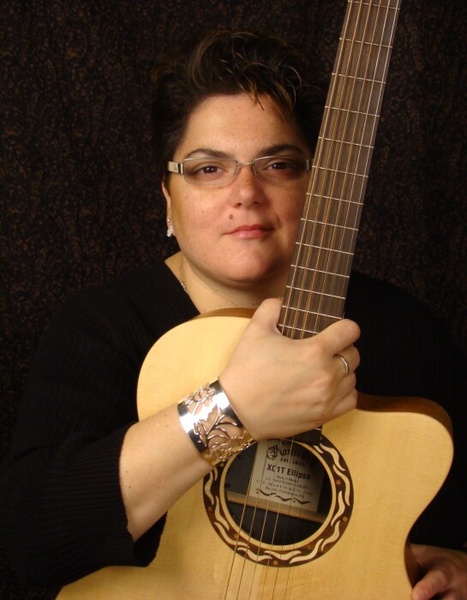 Carolyn J. Messina passed away on December 17, 2020, after a five year battle with Cancer with her family at her side. Carolyn began playing the piano at the age of 4. She subsequently taught herself guitar at 10, wrote poems at 12, and started writing music at 13. In high school, she accompanied the choir on piano and also played keyboard in the West Essex Regional High School's award-winning jazz band.  At 17, she performed one of her original songs for the first time in public at her high school talent show.

Carolyn graduated from William Paterson College in 1994 with a degree in Communications. She then worked for various broadcast public relations firms, including DWJ Television in Ridgewood, New Jersey.  She received several industry awards for music created for a Habitat for Humanity "Women Raise the Roof" documentary (1998)  as well as a special film for Christie's Auction House (1996) on the Mauerbach Sale, a collection of items originally seized by the Nazis which were being sold for the benefit of the victims of the Holocaust. For the past 30 years, Carolyn was actively involved in the music ministry at her church, singing in the choir, as well as playing piano, guitar and bass in their Contemporary Christian ensemble, with the Archdiocese of Newark Youth and Young Adult Ministry. She performed music at Essex County's Theology on Tap and was the opening act for keynote speaker Tony Melendez at Youthfest 2010.  She held a Certificate in Youth Ministry at Immaculate Conception Seminary School at Seton Hall University.   She performed at legendary clubs such as The Bitter End in NYC and The Stone Pony in Asbury Park, coffeehouses in New York and New Jersey, as well as at numerous area restaurants.

Carolyn Messina's music was best described in the industry as Acoustic Folk/Pop/Rock. She was a woman with a guitar, a story-teller whose songs about life, love, loss and more came from personal life experiences.  In 2009, Carolyn recorded and produced her first CD of original music "Carolyn J. Messina - Singer/Songwriter." This 12-Track CD included some of her most popular songs, "Walls," "Give Me Strength," and her 9/11 Tribute Song, "The Fall (9/11)."

She leaves behind her parents, Deacon Dominic Messina, her mother, Valerie Auriemma Messina, of Cape Cod MA, her brother, James Messina, sister in law, Joanne Sorresse Messina, her niece, Maria Rose Messina of Rockaway NJ; her Aunt Carolann Auriemma Garafola of University Park, FL, and her Uncle Dirk Peereboom of Sussex NJ, as well as many cousins from that family, the Rotonda  Family of Fairfield and Newark, NJ; and the Sibilia Family of New York. Ms. Messina was predeceased by her maternal grandparents, Millie and Ben Messina of Caldwell along with her uncle Carl Messina who died the week Carolyn was born. Her aunt, AnnaMarie Peereboom, her maternal grandparents, Anna Marie Casola and Vincent Auriemma of West Caldwell well as her Uncle Ralph Garafola, famed photographer and fine artist. She was loved for her talent, how she touched the lives of so many people in the family as well as in the music industry and in her church. Most importantly is the fact that her friends and family will tell you “Carolyn left behind a bit of heaven where she walked, sang and connected with so many.”

A wake will be held at the Galante Funeral Home, 54 Roseland Ave, Caldwell NJ, Sunday, January 3, 2021 from 2-6 PM. A Memorial Mass will be celebrated at St. Thomas More Church in Fairfield on Monday January 4 at 10 AM. Interment will follow at Prospect Hill Cemetery in Caldwell. For those unable to attend the funeral mass, a Zoom livestream will be available to watch starting on Monday at 10 AM using Personal Meeting ID 997 533 3817 and Password: 2800.

In lieu of flowers, donations in Carolyn´s name can be made to  Hospice of Cape Cod  255 Independence Drive Hyannis MA 02601, or Mary's Place by the Sea, a hospice retreat house for surviving cancer patients 22 Main Ave POB 86 Ocean Grove NJ 07756.

To order memorial trees or send flowers to the family in memory of Carolyn Messina, please visit our flower store.