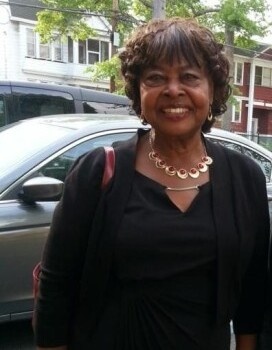 Mrs. Agathe Beauplan, also known as Anne Beauplan of Newark NJ was born on June 1, 1932,in Pilate, Haiti. and passed away on October 4, 2020. As a young adult she moved to Port-au-Prince where she became a schoolteacher. Later, she immigrated to Canada where she got married to Emmanuel Rosemond. The marriage ultimately dissolved, and she returned to Port-au-Prince to flourish in high fashion. In 1986 she settled in the United States.

In 1992, she was baptized as one of Jehovah's Witnesses and later became a full-time evangelizer for 11 years. She thoroughly enjoyed talking to people about Jehovah's purpose to replace this corrupt world with an earthly paradise.

She was also very interested in family and sewing. She dedicated much energy to caring for her family including her mother, her nephews and nieces.

She has lived a simple and peaceful life and she died as she lived, peacefully at home on the bright afternoon of October 4, 2020 at the age of 88.

To order memorial trees or send flowers to the family in memory of Anne Beauplan, please visit our flower store.