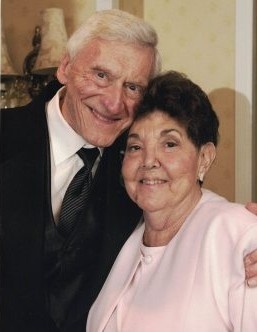 After a long battle with Myelodysplastic Syndrome (MDS) Ann S. Benedek , 83 (nee Pariso) of Union NJ  passed away on December 7, 2019 at the Villa in Florham Park. She was a true example of courage, strength and perseverance.

Funeral from the Galante Funeral Home 2800 Morris Ave. Union NJ 07083 on Friday, December 13, at 9 am. A Funeral Mass will be at St. Michaels Church Union at 10:15 am. Entombment  Holy Cross Cemetery, North Arlington.

She is survived by her husband, Charles Benedek of 50 years, daughter Michelle and her husband James Barone, granddaughter Mia Annabella, sisters Marilyn and Pauline and many loving nieces and nephews.  Ann is predeceased by her sister Eleanor and brothers-in-law John, Norman and Anthony.

Daughter of the late Lucy and James Pariso, she was born on February 13, 1936 and raised in Newark.  Ann married her husband Charles on April 26, 1969.  She moved to Union in 1973. Ann worked as an administrative assistant at Schering Plough until the birth of her only child Michelle.  In her later years, Ann worked as a receptionist for Union Internal Medicine Group until her retirement.  Ann and Charles resided in Union until moving to a retirement community in 2015.

Ann’s greatest joy was spending time with her family and friends. She loved the beach and spent summers with her extended family in Lavallette and Normandy Beach, NJ.

While she only had one child, she treated her daughter’s friends and nieces and nephews as though they were her own and was affectionately known as Mrs. B and fun Aunt Honey

To order memorial trees or send flowers to the family in memory of Ann Benedek, please visit our flower store.