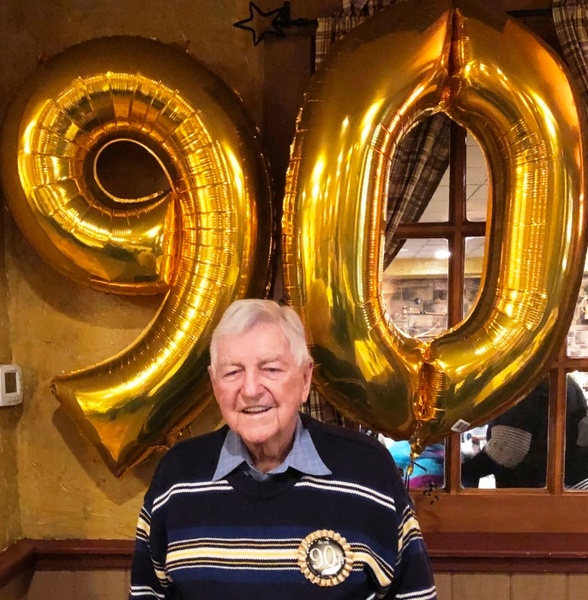 Relatives and friends are kindly invited to attend a visitation for Allen at the Galante Funeral Home, 2800 Morris Ave. Union on Wednesday from 4-8 PM. A Funeral mass will be celebrated at St. James Church in Springfield on Thursday at 11 AM. Interment is private.

Allen was born on January 28, 1929 to Alfred and Anna Mench (nee Burns) and lived his childhood in Maplewood NJ , along with his sister Doris.
Allen graduated from Columbia High School in Maplewood, where he was an All-state baseball player. He had a successful 40 year career in the “Bell System”, starting with Western Electric in Union. It was there that he met Rosemary Thomas, to whom he was married for 11 years until her death in March 1964. He married Maryann Fox on July 22, 1967 and they were married for 50 years, until her death in 2017.
Allen’s work career was interrupted by his service in the Navy for four years during the Korean War. He served on the USS Tripoli and remained a “Navy man” for the rest of his life. He returned to the Bell System following his discharge from the Navy, and retired from NYNEX in 1988.
He and Maryann began their retirement years in Forked River NJ, and subsequently split their time between Forked River and Stuart, Florida. He was a devoted Yankees and Giants fan and was lucky enough to attend two Super Bowls to watch the Giants win championships. In 2016, he moved to Berkeley Heights, NJ.
He is survived by his six children- Beth and her husband Zeeb, Allen and his wife Debbie, Jim and his wife Kris, Billy and his wife Debbie, Maryellen and her husband Bob, and Nancy and her husband Angelo. He is also survived by his fourteen grandchildren: Rosemary Kraft, Christopher Ruggles, Allen Mench, David Mench, Katie Sotak, Ryan Mench, Robert Mench, Marilyn Mench, Christopher Mench, Chelsey Castellano, Michael Zuena, Nicholas Zuena, and Giovanni Zuena.
He was blessed with five great-grandchildren.
Allen was predeceased by his sister, Doris Lichtenberg.

In lieu of Flowers the family prefers that you make Memorials to:

To order memorial trees or send flowers to the family in memory of Allen Mench, please visit our flower store.